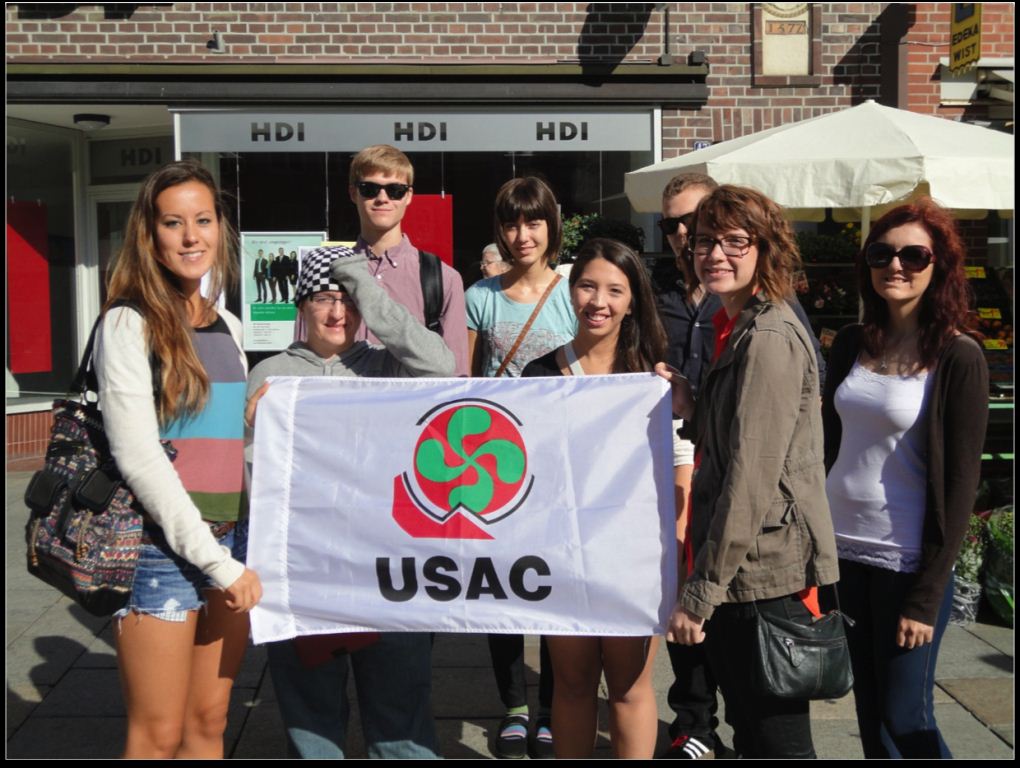 Blog post created from a newsletter update sent by our Lüneburg, Germany staff.

The USAC program offers a diverse collection of excursions and tours set to expand and support every student’s individual experience abroad. USAC-Germany works together with Leuphana Universität, nonprofit groups, and other international organizations to give their students the most enjoyable and productive study abroad experience possible. This semester’s student took the time to mention to us several time how, the USAC-Germany tours throughout the semester enhanced their appreciation for Germany and enriched my cultural understanding of the country.

We start the semester with a scavenger hunt through the historic city center of Lüneburg and continue with various excursions around Lüneburg give students a cultural perspective that tourist don’t usually experience. Halie Mosher (University of Florida) said,

“It was easy for me to find a café or coffee shop that I liked, but I had no idea of the cultural richness of Lüneburg. Every city and town has their charms, and USAC-Germany helped me realize Lüneburg’s.” 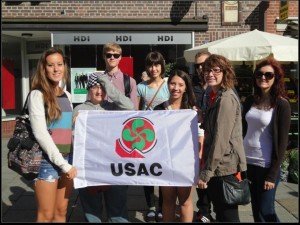 When we visited the 16th-century convent Kloster Lüne in October, students were impressed by the medieval structures and its rich history:

“I was intrigued the moment we arrived. After going through the woods for about twenty minutes, and then arriving there, it was simply like stepping back in time. […] I love seeing historical places like this, like stepping through moments of time and being engulfed with the stories they have to tell.” (Lindsay Janice, University of Mount Union)

The USAC students receive a bus/train pass that enables them to travel throughout the area for free. We take advantage of this pass by travelling together to several historic in-state cities such as Celle, Hamburg, Bremen, etc.

Alex Miles from Valley State University said that his favorite USAC fieldtrip was the orientation in Hamburg:

“I was able to learn interesting facts from our knowledgeable guide, Sören [Köppen, resident director], during our trip to nearby Hamburg. I was able to see important roads and monumental buildings in Hamburg, and if I hadn’t gone on the tour, I would never have learned of their historical significance.” 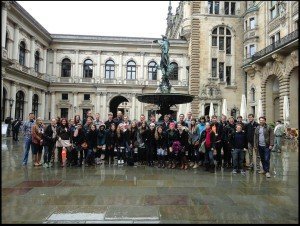 Conor Snow from Goucher College enjoyed going on the USAC trip to Bremen. He enjoyed the guided tour through the narrow streets of old town Bremen. Additionally, the students were also taken to a unique live-theatre performance of 17th & 19th century-historical figures at the museum Bremer Geschichtenhaus in Bremen. Connor said, “the organization from the USAC program was impeccable and they were able to find new and interesting ways to teach us city history besides standard museums.”

Students also take individual trips, especially during highlight points of the year, such as Christmas Markets, where they are free to roam and take in the vibrant atmosphere at their own pace. Megan Thomson, from New College of Florida, went to the picturesque mountain-side city of Goslar: “It was an enjoyable experience where I was able to not only see the cultural aspects, such as the Christmas markets and feel the sense of community, but also the historical sights such as the 900-year old Kaiser palace.”

We visit not only cities, but also specific locations within cities of special interest to the students or related to classes. 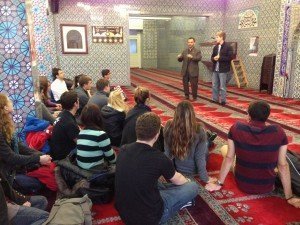 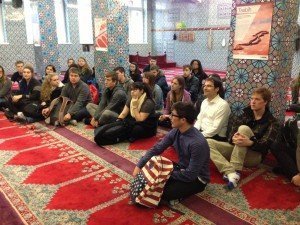 One highlight each semester is the visit of a Turkish mosque in Hamburg, where the students can experience this unique subculture. Since they don’t offer English guided tours, an upper level USAC student usually has the chance to practice their translating skills. This FALL Semester Neil Hetrick (University of Toledo) had the chance to do this: “I greatly enjoyed the experience to translate for the mosque field trip, because it presented me with the opportunity to apply what I learned in German classes on an interesting topic not typically present in American classes.”

The publishing house of Der Spiegel, Europe’s largest newsmagazine is usually another highlight.

Forest Wilson from University of Cincinnati, thought that “Der Spiegel didn’t feel like a typical school trip. It was a very personal learning experience where I met a real journalist and was able to ask questions that specifically interested me.”

Michael Pfurr who attends University of Nevada, Las Vegas, agreed with Forest, saying that, “When I began college I wanted to be a journalist, so seeing the headquarters of an influential news outlet was very interesting for me. I also enjoyed seeing the pride that the Der Spiegel employees had in their work and the process that they go through to ensure that their articles are completely factual.”

The classes take advantage of the surrounding culture as much as possible. This FALL the Advanced German teacher took the class outside the classroom on several occasions. One day, the students prepared their own guided tour through Lüneburg, each giving a presentation at a different location. 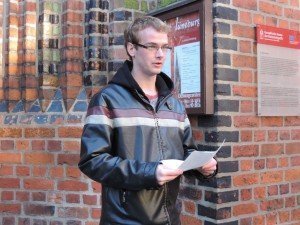 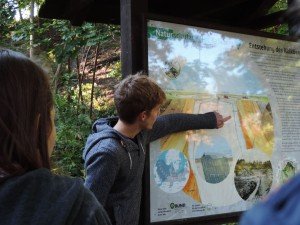 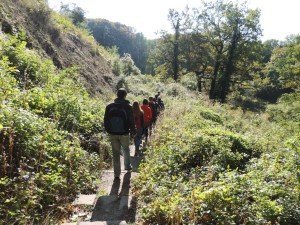 The class at the base of the mountain

On another day they practiced different language structures (such as passive voice) during a tour of the construction site of the central building of Leuphana University, built by the famous architect Daniel Libeskind. 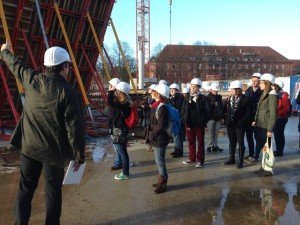 Each FALL semester we offer a tandem language program as part of our conversation classes, which also takes the languages outside of the classroom. Whitney Darrett (University of Evansville, Indiana) especially enjoyed this part of the USAC program: “I was skeptical at first, but with time my language partner and I became friends and are now spending time together outside the program. I enjoyed this innovative approach to learn a language from a peer outside the traditional classroom.”

Finally we would like to share two quotes from final reflections, students wrote for a class on German culture.

“This has been the most exciting, educational, and life-changinge experience of my life. Not only have I been able to live in the most beautiful and amazing city in all of Europe for three months, but I have also been able to learn many things about German history and culture.“ Conor Snow (Goucher College)

“Lüneburg has been the perfect place for this class and I can’t imagine having done my studies anywhere else. The rich history here and the vast number of cities that can be reached by train in an hour or two make it perfect for observing and dissecting German culture.“ Jamie O’Toole (Santa Fe College) 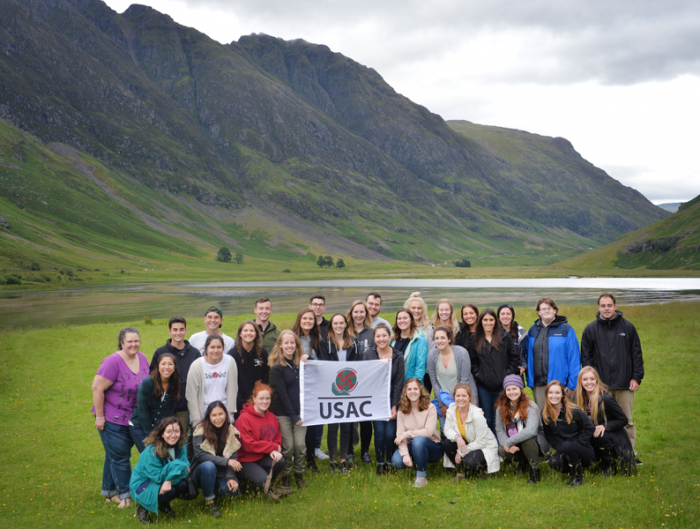 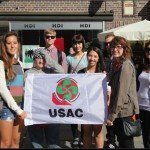