The Perfect Slice of Pai [Thailand] 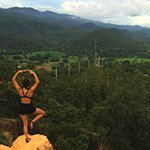 The Perfect Slice of Pai

I have weighed this decision carefully and considered all the options, using prior knowledge and experience as well as universal laws and accepted norms. I have therefore come to this conclusion:

I just had the best weekend of my life.

It was spent in a small town, 140 km. away from Chiang Mai, called Pai. I went with 6 people from my program that I hardly knew, and 4 of us traveled by minibus (really a glorified 15 passenger van) on Friday after class to meet up with the other 3 who were already in Pai. The route to Pai is an interesting one – it is only 50 miles north of Chiang Mai, so in theory would take maybe an hour, hour and a half to get to.

There are also 762 curves on this route (Route 1095) as it goes over, through, and down a ridiculous number of mountains to get to the village. It is not a drive for the easily queasy. In reality, the trip should probably take about 4 hours, if one were to drive at a reasonably safe speed. It takes most minibuses 3 hours flat, because the curves are taken at shockingly fast speeds and slow motorbikes are passed with what seems like reckless abandons by drivers who, I assume, make that drive 2 times a day each way.

Basically, I was very, very, very happy to be alive when we reached the small mountain village of Pai (last reported population (2006): 2,284). But beyond being thankful to be standing on my feet and breathing fresh oxygen, I was also in awe of my surroundings. We arrived right before sunset in the middle of the main street, and immediately my heart was stolen from me by the charming town and bohemian feel of the place. We walked down the street until we reached the bungalows where the rest of our group was staying and rented the bungalow next to them for 110฿/person/night (less than $7 per person for 2 nights). The location was perfect: 2 blocks off the main road and less than one block from where the bars started. We were also very close to the Pai River, but virtually everything in Pai is close to the river.

The first evening we were there was fun but a bit awkward for me as I had really only talked to one person from the group before and I was trying to navigate the whole I-don’t-really-drink-but-it’s-fine-that-you-do thing. Fortunately, the 6 people I was with turned out to be some of the kindest, most genuine, and fun people I’ve ever met. They were so welcoming towards me and though they had a few questions about my choices, they never judged or mocked or pressured. Once I realized this about them, I began to enjoy myself a lot more, and it really set up the next day (Saturday) for success.

We started the day around noon and went out for breakfast and to rent motorbikes for 24 hours ($3/bike, and we got 4 to split between the 7 of us; I was passenger to a veteran motorbike driver). We then rode about 15 minutes through the beautiful rural area surrounding Pai to Mo Paeng Waterfall and swam around for a bit and slid down the naturally slick surfaces in and around the waterfall. Our next stop was Pai Canyon (Kong Lan), which was another 15-20 minute motorbike ride from the waterfall.

When I hear the word “canyon”, I think Grand Canyon, USA. As in, two high sides with a steep valley in between. The Pai Canyon was almost the opposite of that. There were natural walkways 50-200 feet up that we could very carefully climb and cross, sometimes having to use our hands and knees to grip the ground so we wouldn’t fall off the ledge. We unintentionally got there just in time for sunset, too, so that was pretty cool. After the sun had set, we rode the motorbikes back into town and got changed for dinner. We spent the night wandering around town, sitting in some different bars, and meeting strangers as well as talking amongst ourselves. It was very relaxed and suited the atmosphere perfectly.

The next day, Natasha and Isaac kindly offered to teach me how to drive a motorbike, since I had just been riding on the back of Isaac’s the whole time. It started out pretty well. I tipped over on a curve getting out of town but the bike and I were fine. I gained a little more confidence after that (near misses will do that to a person) and we rode for about 10 minutes until we found a random place that had elephants you could feed for 20฿. Natasha snapped this awesome picture of me feeding a banana to one of the elephants (the elephant and I might have both gotten a little carried away): It was getting close to the time we needed to check out of our bungalow, so I said goodbye to my new friends (the elephants) and we got on our motorbikes to go home. As we were leaving, I got a little too excited and confused the accelerator with the brake and SLAMMED into the elephant park’s sign going very fast. Everything around me was concrete so it could have been really bad except for the pile of elephant poop on the ground directly under the sign, in which I landed on my back. It broke my fall so well that, while the motorbike sustained 1300฿ worth of damage, I made out with only a scratch and some bruises on my left leg.

Everyone in the parking lot area rushed to my side to see if I was okay, then a Thai elephant guide dragged me over to the pool of dirty water they feed the elephants from and started throwing buckets of water on my back and rubbing my backside enthusiastically. He was very.. uh.. helpful.

I was really shaken up from the crash (mentally more than anything else) so I rode back as a passenger on Isaac’s bike and Natasha drove the one I had crashed. After a shower and a change of clothes, I felt much better. We all laughed about my “luck” and went out to lunch, then I got on a minibus and went home, the rest of the group following an hour later.

The best part about going home was that it felt just like that – going home. I realized on the returning minibus ride that my little dorm on the outskirts of Chiang Mai really felt like home to me; a place where I could rest and recuperate from the weekend (and have wifi again!). As I walked into my room and collapsed on my bed, I smiled at the familiar sight and smell of my room, and felt the relief that comes with being in one’s own home. It may seem like a small thing, but I think this marks one of my final transitions into really living in Thailand, and I’m so excited for whatever my next step will be.

If you’re wondering how you can find your own Slice of Pai, learn more about our Thailand program.

The Perfect Slice of Pai [Thailand]