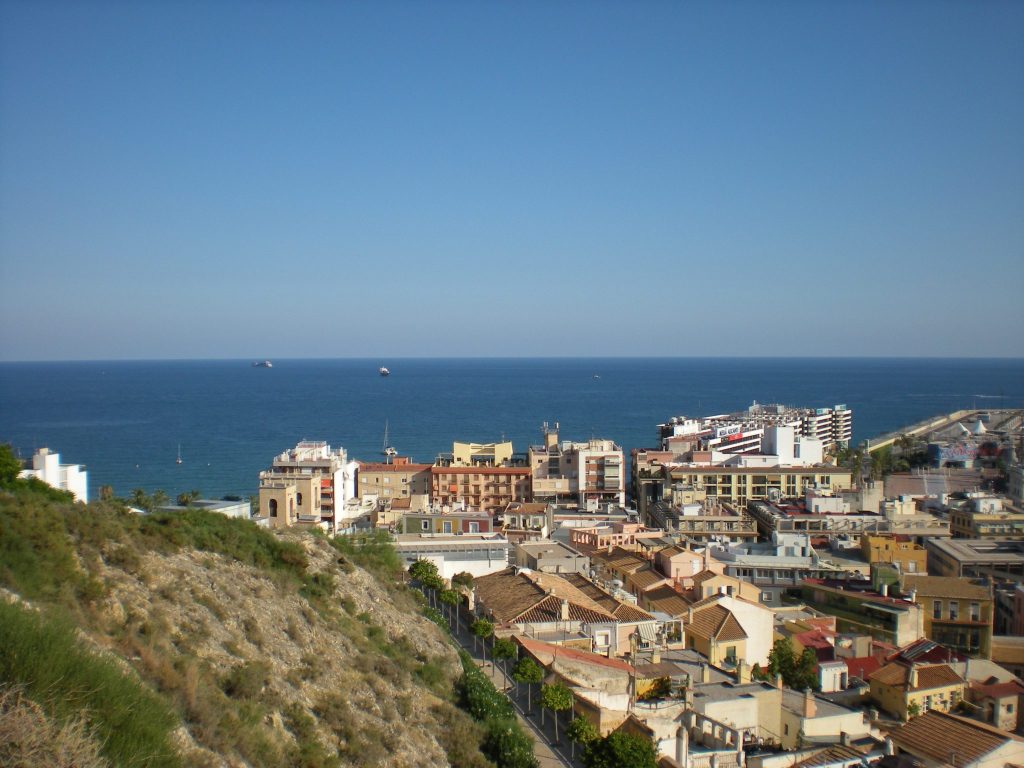 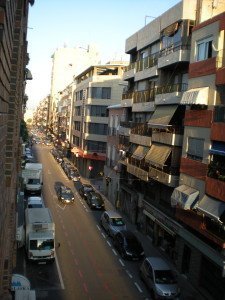 The balcony of my host family looks out onto this street.

1. Everybody knows that the Spanish have a different eating schedule. The big meal is around 2:30 with my family, and dinner is around 10:00PM. They also have a different sleep schedule: they eat late, they sleep late. The family (including the ten year old girl) usually goes to sleep after midnight.

2. Houses are colorful. I’m living in a third floor apartment. It’s beautiful and colorful; the walls are bright orange, yellow, pink, green, dark blue. My bedroom is the small green room between the kitchen and sitting/dinning room.

3. They only have one TV. Unlike in American homes where the TV is a dividing force in each room, here there is only one old fashioned box TV in the sitting room. It’s on almost always and the whole family seems to cycle around it based on which shows they like, but they are always in and out of the common room.

4. They start numbering their floors at zero. The ground floor is zero, the second floor is one.

6. The electricity and water here are heavily taxed. Air conditioning is used sparingly, if it’s used at all. It has reached the 90*s every day. People actually turn the lights off when they leave a room, always and with such force of habit that if I forget to turn the light off it is usually noticed before I get across the next room.

7. You don’t walk and eat. Even if you’re hungry, even if you’re just having a coffee or an ice cream. It’s rude.

8. Life is slower. I read a list of regrets from people in the United States. The number one regret was that they spent too much time at work and not enough time with their friends and family. People in Spain don’t have that problem. My host parents get back from work at 12:30PM, cook La Comida – lunch, and spend the rest of the afternoon around the house when everything is closed anyway. Around 9:00 the parents and little girl go to the park. The parents talk with their neighbors while the children play. 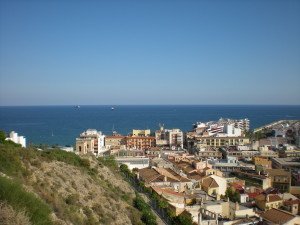 I’m enrolled in a Sailing class that happens out there. It’s beautiful and warm.

9. They have play grounds in the middle of the big streets. The main streets have a huge island running down the middle, it’s about five or six lanes of traffic wide and in the center every couple of blocks there is a small jungle gym and a trampoline sunk into the ground.

10. Everybody talks with their eyebrows raised. At first I thought my host mom was watching me so intensely when I talked to her because I’m slow to understand. But now I see everybody talking to each other with such intensity it would start an argument in the states.

11. Clothes only go on sale twice a year. I just missed the end of summer sale. My friend and I went shopping and didn’t end up getting anything because everything was full price. They don’t have many malls here, mostly Spaniards live in cities or small towns that are very compact – like a city. So the stores are along the streets. But La Corta Ingles is a cross between an American department store and a mall.

12. You don’t clean up after your dog. Instead the streets are scrubbed clean every night.

13. The side walks are beautiful, smooth tile.

14. Did I mention they speak Spanish, not English? Beyond daily transactions, buying things, summarizing a custom from the United States in one sentence (“We eat our big meal at 6:00 or 7:00.”), I don’t really know what to say, yet.

Take a look at our USAC Alicante, Spain program. 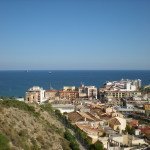