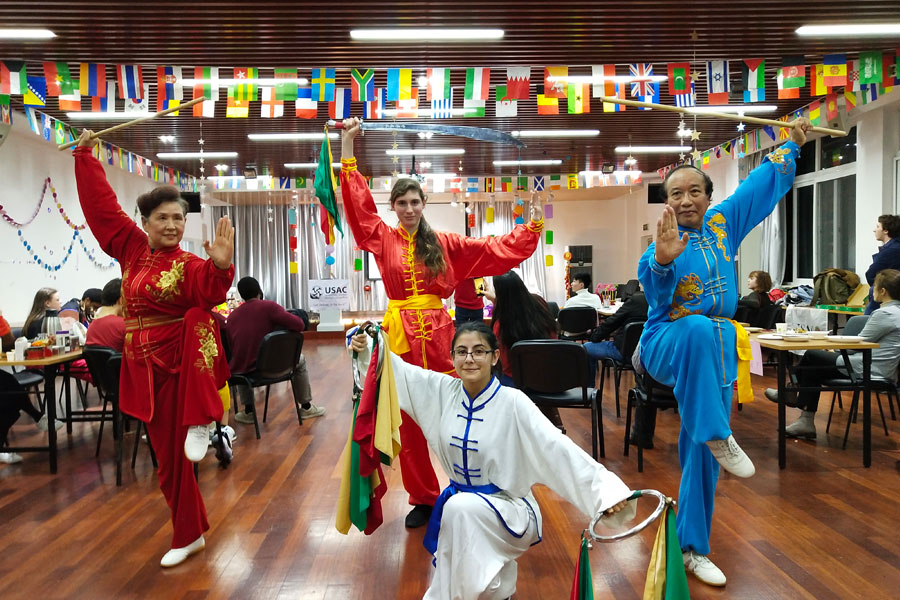 Shanghai is the hallmark of China’s booming economy. For students who want to study business and learn the Chinese language, there’s no better city. Shanghai is home to 300 or the world’s Fortune 500 companies and this location allows you to jump-start your business career with a Summer Professional Development Internship. While learning Chinese language and business logistics during the week, you will be able to take in dozens of art exhibitions, sport competitions, movies, museums, musical events, nightclubs, and more.  Exactly what you’d expect from a large city, Shanghai is busy, full of culture, diversity, and a mix of modern and historic sites. Despite Shanghai’s enormity, it ranks among the world’s safest cities; and it’s easy to get around, either on the modern subway system or the ride share bicycles. In the words of a USAC student, “Shanghai is an epic experience, not to be missed.”

Shanghai University of home to nearly 40,000 students that attend classes across three campuses. Every year more than 2,000 international students attend the university. The Shanghai program is located on the Yanchang Campus, 20 minutes from the downtown area. There are various types of sports and recreational facilities open to students, such as grassland football fields, basketball courts, and a swimming pool. A tennis and soccer facility is adjacent to the campus. Two gyms are within walking distance from the campus. A modern shopping mall with a number of restaurants, hotels, clothes stores, and supermarkets is 5-minute walk from the campus. There are also opportunities to meet local people through club activities across town such as cooking, climbing, hiking, football, rugby, racket sports, skating, yoga, Tai Chi, book clubs, arts and crafts and more. 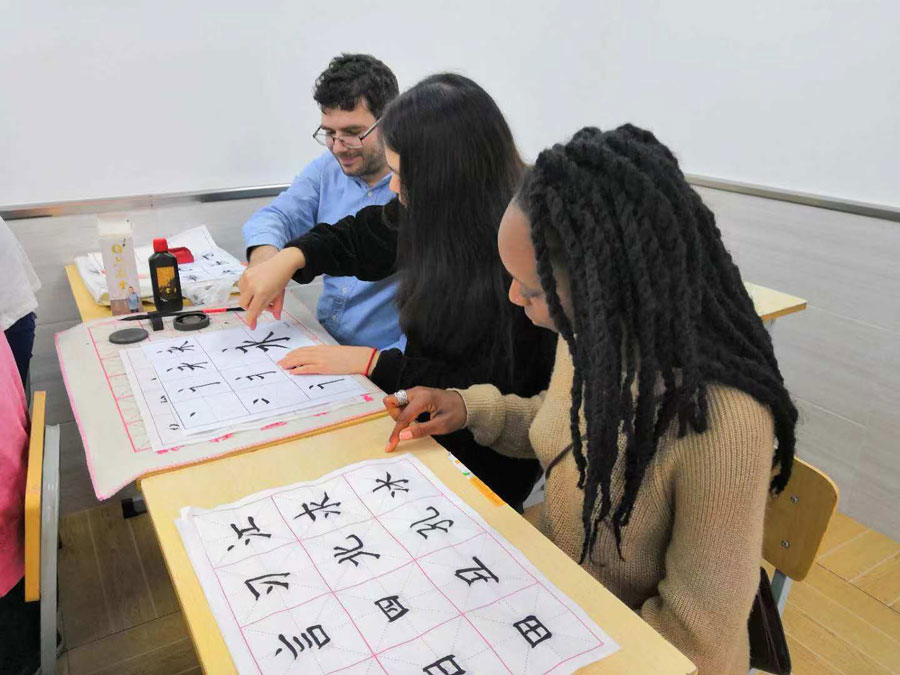 The Shanghai program offers an intensive language approach that allows you to complete up to one year of university foreign language coursework in only one semester. You can also combine courses from International Business and Intensive Chinese Language. The summer Professional Development Internship program is an opportunity to focus on an internship and invest in your future; the 9-week program (Sessions I & II) features a 6-credit internship with the option of adding additional course electives, schedule permitting. This is an ideal opportunity to gain substantial professional experience during the summer: deepen your understanding of the Chinese business environment and market, forge valuable professional contacts and relationships, and participate in seminar meetings and reflection to fully maximize the benefit of the experience to your future career.

Interesting fact about the city

A short distance outside of Shanghai you’ll find a variety of ancient water towns where people use waterways like roads. In these towns locals and tourists travel around on canal boats.

If you need a break from the city you’ll have no problem finding a few places within close proximity to Shanghai to visit over the weekend. Located only an hour outside of Shanghai is Hangzhou, the capital of the Zhejing province, with a beautiful lake, rolling hills and tea fields. A little further away, you’ll find Moganshan, considered the “Hamptons of China” is an old hill station in Deqing county, Zheijing province. This is the perfect getaway from some r’n’r and some mountain air. Of course, Shanghai has an international airport that can easily take you to other destinations in China and southeast Asia. Before you go booking your travel, check out the organized field trips that USAC offers that are included in program fees.

Shanghai City Tour
Visit the most famous places in the city such as the Bund, the Pearl Tower, Yu Garden and Bazaar, and the Shanghai History Museum where you will get a sense of Shanghai’s past, present, and future. 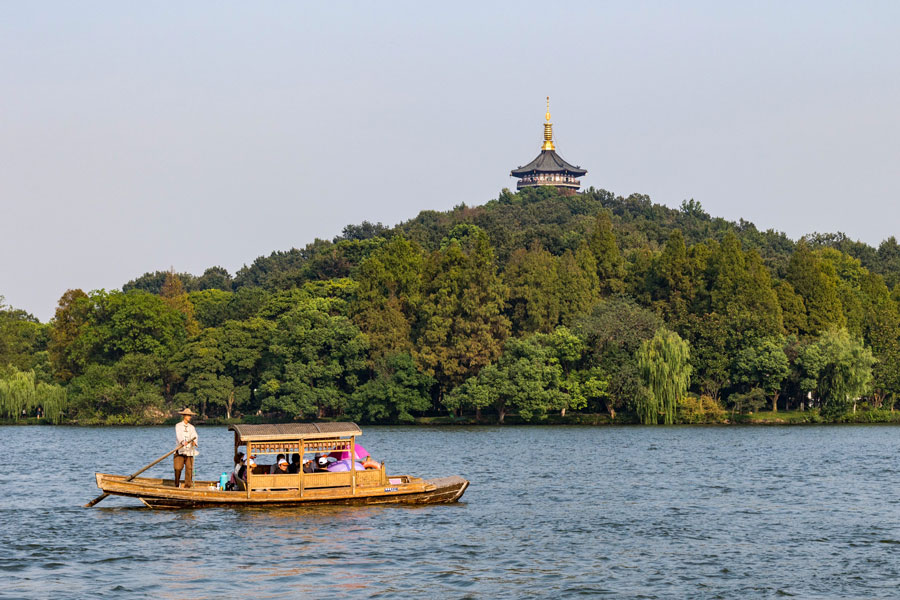 Xitang
Located on the canal between Hangzhou and Beijing, Xitang people still live in hteir centuries-old houses on hte water, practicing the ancient customs of many water towns in the Yangtze delta. Arched roofs, lofty gables, stone bridges, and green willows lining the banks can be found almost everywhere in town. In 2005, Paramount Pictures sho the canal scenes for Mission Impossible III in this water village. 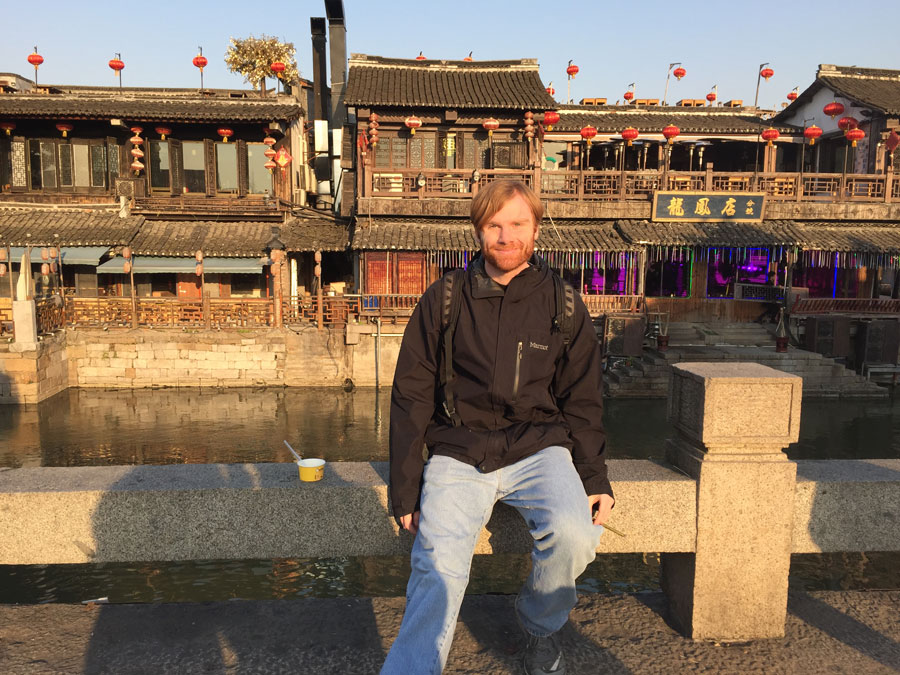 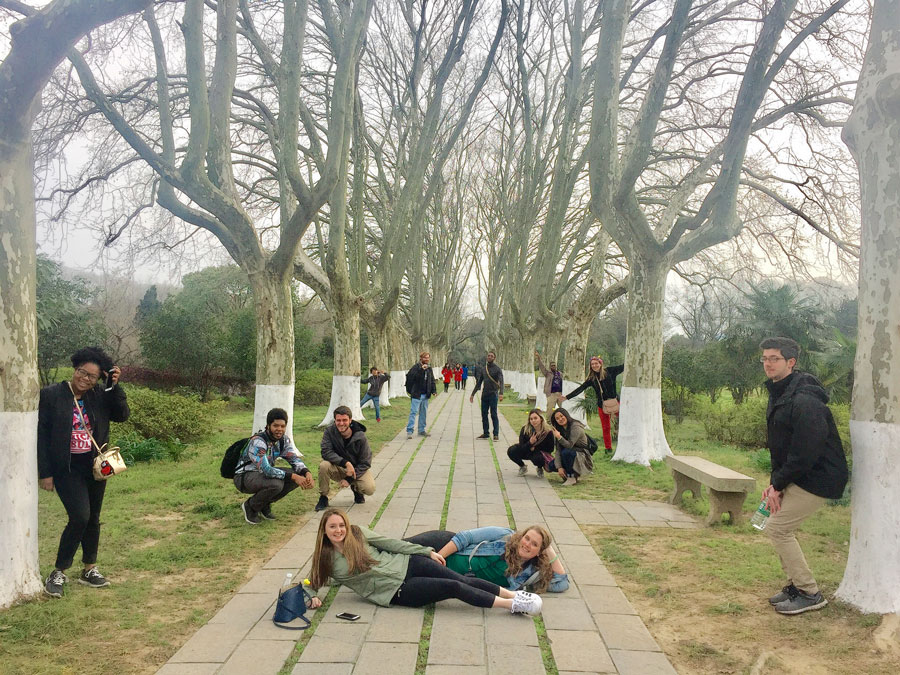 Strike a pose in Nanjing

What students have to say

“Going to China was my first study abroad experience. Even since I entered college, I wanted to study abroad and my third year I decided to pursue it. And I was not disappointed. I picked China because it’s completely different compared to the States, culturally and traditionally and everything I between. USAC was so helpful with my process of going to China, their website had past students’ personal reviews that I read on and videos which showed me what I was getting in to. The on-site staff was so helpful, encouraging when I first arrive in China. They gave us pointers how to get around the city, their favorite, local restaurants and everything. At the end of my program I was able to make connections with people across the US and people in China.” Chicharlah Mudrow

“I had an incredible time studying abroad to Shanghai, I was hesitant at first to go since I originally wanted to study in Australia. My biggest regret was only going for a semester, study abroad was an absolute blast. Classes were only once a week, and language classes met 3x which gave my friends and I a good amount of time to explore the city. Shanghai was absolutely amazing, you have the best of both worlds since the city is pretty westernized. I met amazing people. Don’t let people suck you into studying in Europe, China is so cheap, and I was able to visit multiple other countries in Asia for incredibly cheap. The food was great and the people are very friendly to foreigners since they are wanting to practice their english. I can’t wait to visit Shanghai again.” Angie Willemsen

“I loved studying abroad in Shanghai with the USAC Program. The program price is very reasonable compared to other programs in China. The USAC administration in the U.S. and China was very helpful before and during the program. I loved the cultural immersion tours to Beijing, Xi’an, and the smaller cities around Shanghai. The school is very centrally located and is only a few stops away from Nanjing Rd (the main shopping area). The campus also has many food options in case you don’t want to eat at the school cafeteria. Overall, choosing the USAC Shanghai program was one of the best decisions I have ever made and I would strongly recommend it to anyone who wants to study abroad.” Jenna Sanford 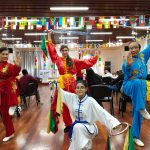