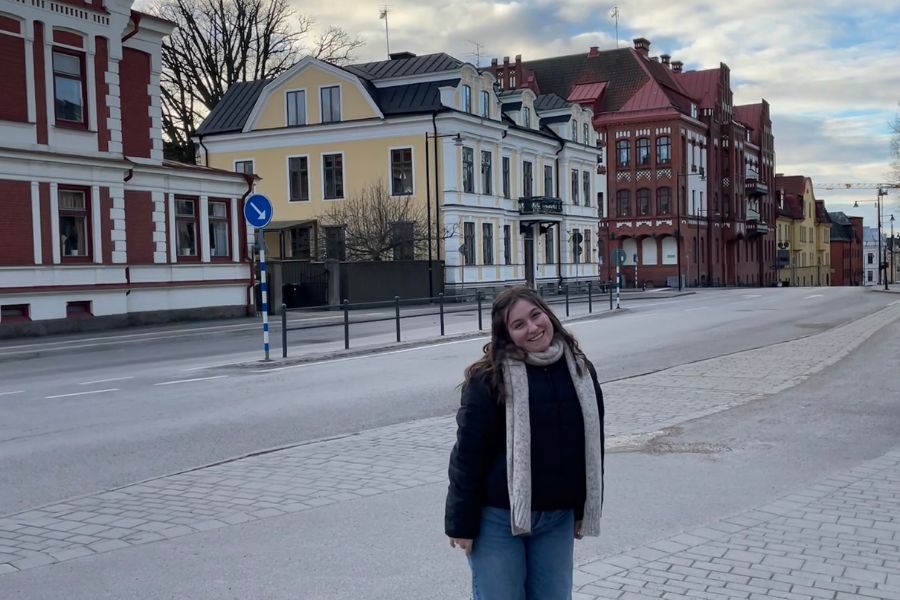 Lexus Thompson is a student at Boise State University. She is currently studying abroad in Växjö, Sweden with USAC.

A giant black suitcase with paint stains on the top sat upside down on my parent’s bathroom scale. I attempted to pack enough for six months of living into a backpack and two suitcases. Trying to stay under the weight limit of 50 pounds a suitcase, I used every type of hack I could find on Pinterest. You know the ones… “10 ways to pack a suitcase,” “What to bring on your trip to study abroad,” “Nine essential items you need for study abroad,” etc… My mom and I struggled while we attempted to take all the air out of the compression bags we bought for my comforter and sheets, putting all of our body weight on the bags to get as much air as humanly possible out of it.

I ended up with two large suitcases just under 50 pounds, a backpacking backpack and a regular backpack. I felt so prepared and glad I was packed in advance. The night before my flight was leaving though, some girls from my program messaged me and said that they were taking one suitcase. I had to wake up at 4:30 a.m. the next morning but obviously, the appropriate response was to start repacking everything at 10:00 p.m. the night before. So, I repacked and I reweighed. I took stuff out of the suitcase and I added things in. I am better off for it. Carrying a backpacking backpack on your back, backpack on your front and a 49.4 pound suitcase at your side is no easy feat. Truthfully, you never need as much as you think you need, so listen to your intuition. Talk to the people that are going with you to study abroad. Ask what they’re bringing. Don’t be afraid to show vulnerability and speak up first. Print and use your USAC itineraries and lists! They have all the checklists! It is amazing! You can literally check off the items as you complete them. It makes my heart happy.

As I write this, I am sitting in the SEATAC airport waiting on my flight to Chicago which will take me to Copenhagen, Denmark and then I will train to Växjö, Sweden, my final destination. I am thanking my lucky stars I have traveled through airports and other countries before, so I know what to expect. I have seen some travel horror stories and am no stranger to unexpected hurdles. What I have learned from seeing these things is: stay calm. All havoc breaks loose when people freak out. Airport lines move slow, be patient and kind. You’re stressed because your flight takes off in half an hour but someone else’s could be taking off in 10 minutes. Airlines wait for you if you’re late, they call over the intercom. Pickpockets are a deal in the area you’re going to? Guess what, you’re debit card card can be canceled, you can buy a new phone, it will all be okay.

With that being said, always air on the side of caution. I was sitting in the Chicago Airport, waiting for my flight to Copenhagen for seven hours. There was a lady that was also very early to the flight and she wanted to make sure the gate was for the Copenhagen flight but she didn’t speak English. We used our own means of communication to determine that the gate we were at was, in fact, the correct gate. She was an older lady and had been dropped off by an airport employee from a wheelchair. She sat across from me in the waiting area at first. She began to speak to herself in her chair. A security guard walked by our seats and ask if we knew who’s bag was sitting in a chair about 8 seats from us. I believed it was the woman’s so I asked but she did not respond. A man behind us said, “she is praying she cannot hear you”.

So we, the security guard, the man behind me and I waited while the woman prayed. I had never seen someone pray like this before. She would be sitting and talking in what I later learned was Arabic. Then she would stand up and cross her arms in front of her and speak more. It was beautiful to watch and in that moment I thought to myself, “thank you for traveling, without going to new places you would have never been able to experience something like this”.

The bag ended up benign hers. So the security guard gave it to her. The woman got up and sat right next to me, well, next to the large backpack in the seat next to me. The woman tried to speak to me. But we could not understand each other. I tried to pull up google translate but she did not understand that either. The whole time I was wary of her hand on my bag but something intuition told me that this woman was not a threat and I think she felt the same way. Also, it helped that the security guard was across us, keeping an eye on us, as I believe he was wary as well.

The woman ended up getting the english words out “seventy two” while point to herself and making the hand gestures of the number. I replied, “I am 20” with the appropriate hand signals. The woman smiled faintly and said “so small” in a thick accent. Then we turned away and there was a bit of awkward silence. Then I saw her take out her phone and make a call. She handed me the phone after talking for a while. She exclaimed, “my son- doctor” and pointed to the phone.

I answered “hello”, wondering if this was really a good idea… The man on the other end of the phone told me that his mother was hungry but she didn’t know where any food was and if I could show her then she would buy me food. I was a little skeptical, as I was traveling alone and the security guard had left. But there happened to be a new person across from us. I asked if they spoke any Arabic. Turns out, he knew some! They communicated for a minute and the man said he would take her to eat. I was very appreciative as I wanted her to be cared for but wasn’t sure I could do it effectively and was weary of wandering off with a stranger.

So, the woman and I went our separate ways. I saw glimpses of her on the plane and in the Copenhagen airport but alas, she was gone. I silently thanked her for letting me see what her prayer looked like and inviting me into the beauty of it. I also thanked her for trusting me.

When traveling, I believe it is important to look out for yourself but it is also important to be open to the people around you. As I did, you can be cautious, still meet new people and get to see the beauties of other people’s cultures.

I am now in Växjö, Sweden and it is beautiful. I am currently watching the sunrise from my bed and there is golden sunlight pouring in. The buildings in this city are those cute, colorful and brick buildings you think of when you think of places like Denmark and Sweden. If you have any itch in your soul to study abroad… DO IT! You will thank yourself for the beauty you will get to witness in this world. My journey has just begun, but I already have plenty of stories to tell.

Immerse in a new culture, practice a second language, and globalize your perspectives through study abroad. Now accepting applications for Summer and Fall 2022. Get started today. 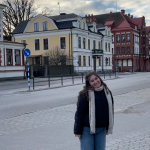