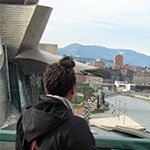 As an avid viewer of the show The Amazing Race, I have always dreamt of traveling abroad and doing what plenty of people never have the chance to do. I have always been a shy guy and the opposite of a risk taker.

I was a person people said would never leave my hometown of Yakima, Washington. That just drove me to make sure I could go abroad.

In order to study abroad, I had to get classes that would transfer back to my university which ended up being no problem. I also wanted to go somewhere that would take me completely out of my comfort zone, so I chose Spain.

Getting on the plane at SeaTac and trekking 10 plus hours to Madrid Spain I felt a combination of nervousness and excited energy about not knowing what to expect.

The instant I walked off the plane I knew I was in for the best 4 months of my life; months that would be filled with adventures, experiences and, of course, learning. I walked out of the terminal to meet my program advisor Ibon, who chauffeured the group to our hotel where we would be staying the next 4 nights before traveling to Bilbao.

The Streets of Madrid

Walking the streets of Madrid that night was a remarkable feeling that I had never had before.

The constant influence of Spanish, which I had had no prior knowledge of, street performers, ham museums everywhere and the feeling of living my dream had me smiling from ear to ear.

My experience abroad has taught me about myself and I have grown as a person because of it. It is something I wouldn’t have experienced if I hadn’t pushed myself to study abroad despite my reservations.

Bilbao is where I attended school and its population is roughly 350,000 people. But where we lived was a suburb called Getxo. It was a 15 minute walk to the beach and a 25 minute metro ride every day to school.

It was one of the most beautiful places I have ever been to and I am lucky I got to call it home. Being abroad allowed me to completely immerse myself in the culture, learn the customs of everyday life, and meet new people.

I was in a place where I didn’t have a cell phone at my fingertips, I didn’t speak any Spanish, and I was in a severely unfamiliar environment. It was just me against the world. It taught me to be more independent by living on my own and not relying on others. It’s not like living in Ellensburg where I can just drive 45 minutes and be home. I was half way across the world. There was no turning back.

My favorite part about being abroad was exploring the city and what it had to offer. Almost every Friday the program advisors would take my group to do different activities around Bilbao. For example, the Bull fighting arena, markets, hiking trails, and simply show us other parts of the city. Participating enriched my experience that much more. I also enjoyed my classes as my class sizes ranged from 6 to 20 people and the teachers were kind and helpful.

The Struggle Is Real

One of the biggest struggles I had in Bilbao is showing up in Spain not knowing much Spanish. It was something I had to deal with on an everyday basis. I will never forget going to the grocery store and trying to ask where the butter was. I finally pointed to the bread then pretended to spread butter on it.

The clerk finally caught on and showed me where it was. Or when I was sick and had to get medicine, the clerk spoke zero English so I just coughed and pointed to my throat and pointed to my nose. It got the point across and he gave me some medicine.

Experiences like that gave me confidence and made me into a more independent person today.

Get up, get going and make your dreams a reality. Explore what this world has to offer by studying abroad and make memories along the way. It is something you never forget and you will have an endless amount of stories for years to come. 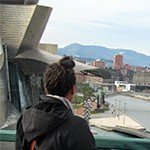