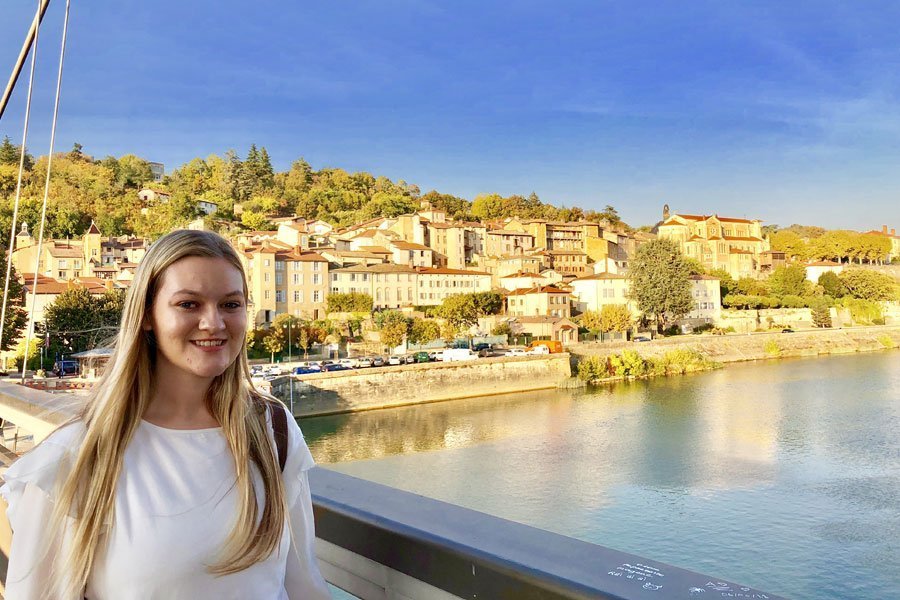 I’ve been studying abroad in Lyon, France for five months and one of the first things I learned is it doesn’t take but an hour to travel from Lyon to its outskirts. A bit further down the road is Trévoux, a quaint village dating back to the Middle Ages that also runs along the Saone river, just north of Lyon’s bustling streets and arrondissements. From the view of Trévoux’s splendid bridge, you can snap  a picturesque view of the community’s yellow brick and pastel colored buildings along with its hidden cottages.  If you trot to the heart of the village, you will discover local artisan shops on every corner, antique stores nestled between little homes surrounded by the nostalgia of beyond yesteryear, and numerous cafes waiting to serve warm crêpes. To get to all of these points of interest, you can’t miss navigating between the bumpy cobblestone streets and witnessing a familial ambiance radiating from the tables shared by those on a Sunday outing. 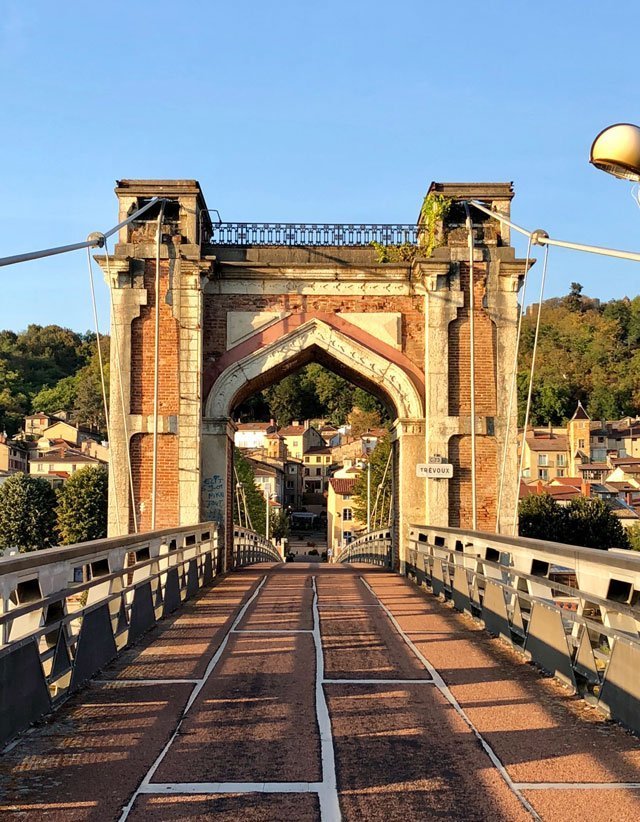 On the way to Trévoux

If the main image of this blog post of tangled back roads and winding paths through the hills of grape farms doesn’t toggle some association with the quaint nature of France, then what does? Certainly, when we think of France, one of the first things to come to mind are also the rainy streets of Paris on an autumn night, with a warm, yellow light radiating from the windows of elegant restaurants. The pitter patter of the rain is accompanied by the enthusiastic clinking of wine glasses at the long tables of these establishments. To deepen the splendor, the Eiffel Tower overlooks this pleasant night, and her lights twinkle with approval and satisfaction. C’est la vie française. 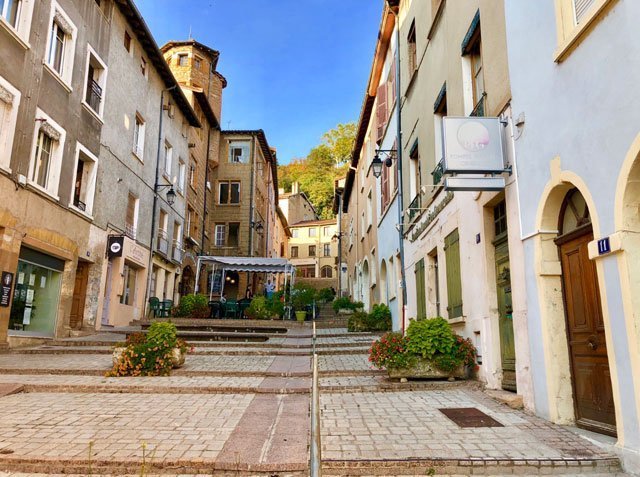 However, we seldom wonder, much less appreciate, what happens on the side roads of the Rue de La République in Lyon or not too far from the Champs-Elysees in Paris. The things that exist day to day that are often excluded from the scenery that appears in postcards. As a student who’s been studying abroad in Lyon, France, I’ve come to appreciate the trusty Kebab restaurants on the side streets of Lyon. Whether you’re looking for a quick, inexpensive bite to eat or to get your fix for something more spicy, the Kebab restaurants always provide a solution. Not too far from L’Hôtel de Ville, there is a string of four Turkish owned restaurants advertising “Street Food” and their interpretation of inexpensive tacos. On the other side of town, near the station of Perrache, is an African fast food restaurant, and not too far, three Venezuelan women run their own cafe, dishing out their original, handmade empanadas.

Today, I wandered into a Kebab restaurant and ordered “un tacos au poulet avec de la sauce algérienne… simple”. When I seated myself, I wasn’t too far from a French family peacefully eating a Sunday meal together, although unauthentically. In the other room, one of the Turkish men was fiddling with the remote to change the channel. When I left a few minutes later, he said, “Merci Madame.” As I was leaving, dazed, one of Lyon’s many electric scooters almost brushed by back. “Attention, Madame”, a French man said. Yesterday, I was on the metro and sat next to a Muslim woman of North Africa descent and her daughter. I let her know how cute her child was, to which she said, “Merci, la belle.” The other day, while in Starbucks here, I was sitting next to a mixed family: The dad was darker than the mother and each parent had a couple children from a previous marriage. The difference in skin tone among them didn’t hinder anything; they joked around and were as cohesive as any other family.

Of course, this reality isn’t something you could easily discover from the outside. Due to France’s history of demographic categorization being in a negative context, the 5th Republic doesn’t account for ethnic background or religion on their census polls; therefore, it’s easy to be under the classical impression that the overwhelming majority of France bears light complexions and adheres to Catholicism–though for some, it is perhaps a lapsed adherence. The reality is that on paper, all France’s intricate diversity is not captured, a fact which acts as a double edged sword.

France is supposed to be, first and foremostly, a dynamic Republic of French people, who may happen to adhere to different religious beliefs (or not), speak different languages at home, and come from different parts of the world. Many believe that keeping second languages, ethnic and cultural backgrounds, and religious identities secondary to one’s national identity is essential to this model. But on the same token, the practice, manifested in the manner that censuses are conducted, may overlook the wonderful diversity that exists in many parts of France and make it difficult to conduct valuable, in-depth sociological studies. 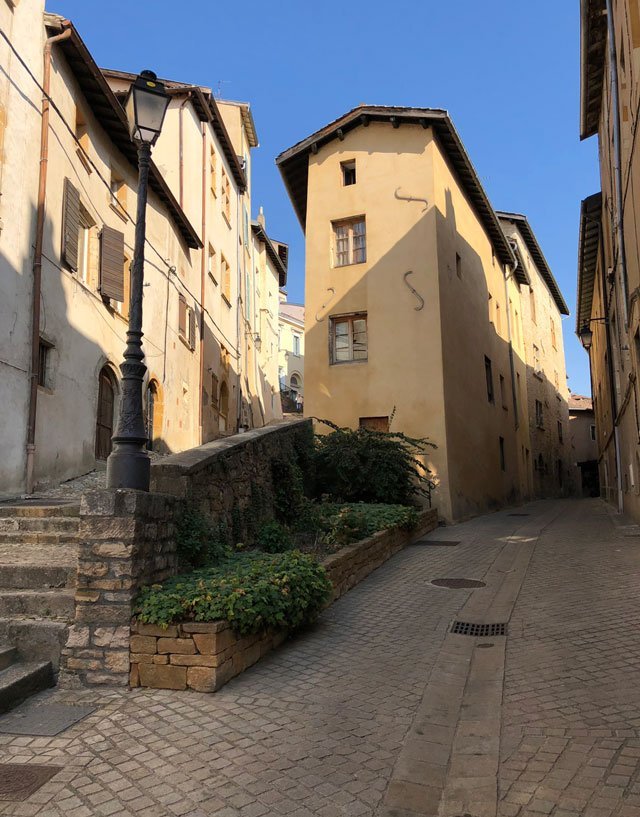 Therefore, to appreciate France’s truly multi-ethnic character and diverse personality, it is necessary to live in it yourself. Being in Lyon, there are endless opportunities to interact with people from diverse backgrounds and get to know how they exist side-by-side on a daily basis. There are few experiences as enlightening as witnessing the multifaceted nature of what defines France. Moreover, you will find yourself, like I found myself, being another embellishment of this diversity.

Ashley Oerman is a Grand Valley State University student. She studied abroad in Lyon, France in 2018 and 2019. 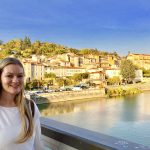