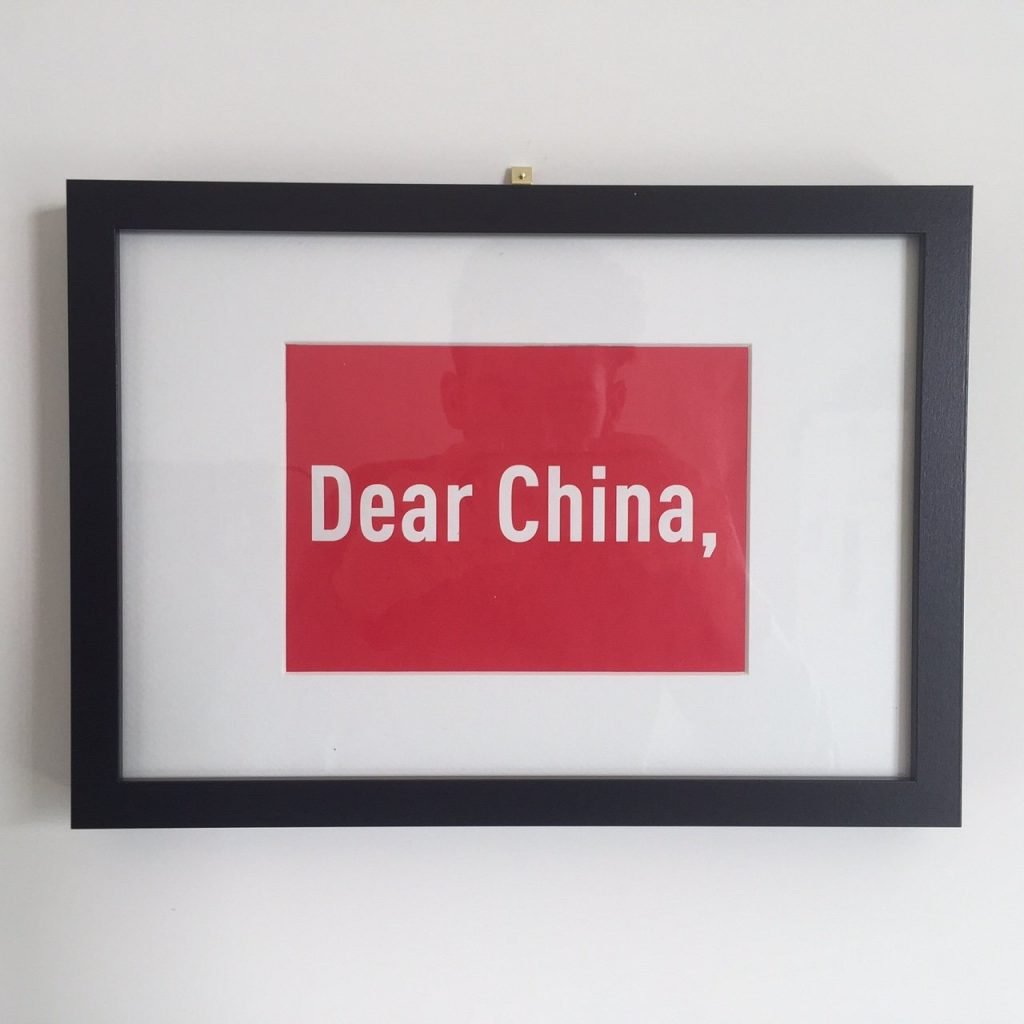 Brent Coutler was a program advisor here in the USAC central office circa 2011. He left to pursue his career abroad returning to Chengdu, China, the very same city he had once studied abroad in. After four years of living in Chengdu, he’s made a lot of progress new friendships, new foods tried, and, of course, his upward career in communications abroad.

You never know where your experience studying abroad will take you!

Read his update below!

I wanted to share with you some of my experiences in Chengdu and get you up-to-date with the changes in the city and what I’m doing now. The year I spent working at USAC in 2011/2012 was a great learning experience, and it’s because of USAC that I’ve been able to extend my life abroad. I have always enjoyed sharing my story and hope that you continue to feel free to use me as a resource for your students. I always try to help if I can.

Bellow are some recent photos of Chengdu with comments that will hopefully provide you with some perspective on this rapidly changing city that is truly the gem of China. 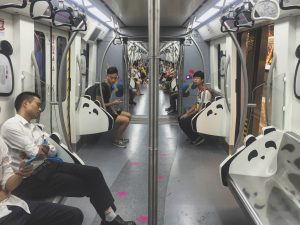 There are now 4 metro lines with another one opening at the end of the year. As you can see, one of the cars on line 3 is specially adorned with pandas—you have to be lucky to get it. 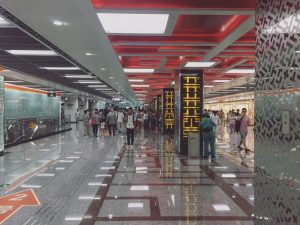 The great news is that this new metro line has a station at Southwest University of Nationalities, the university where USAC students study. That means the city is more accessible to students now than ever before! 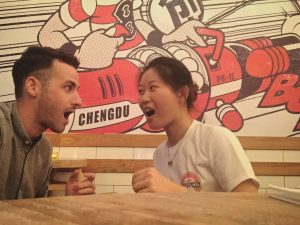 Jiajing and me having dinner together. 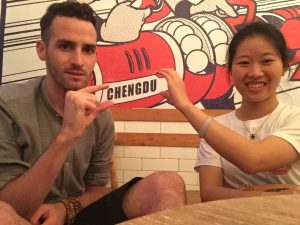 This is a restaurant in Chengdu’s newly developed commercial area called Taikooli. There are many eastern and western choices—you can get some of the fanciest Sichuan food, or customize your own burger. When I first came to Chengdu in 2012, getting a Greek salad was merely a pipe dream. Now you can get everything, from paleo quinoa salad bowls to Vietnamese fusion. Think imported wine, Italian food, dim sum, sushi, and the list goes on. 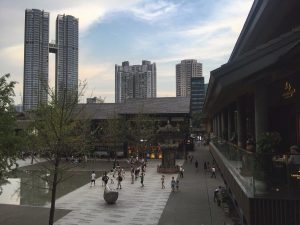 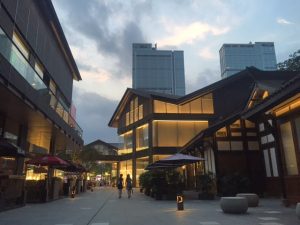 Tenants range from multi-floored Apple and Nike Stores to H&M and Zara. Oh and of course all the luxury brands for the consumer obsessed Chinese—from Louis Vuitton and Givenchy to D-Squared and Yoshi Yamamoto. It’s no wonder that it has been called the best shopping district in Mainland China. 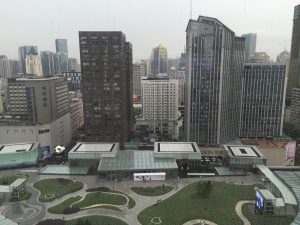 This was taken from a 5-star hotel nearby called Niccolo. Below this green space is a 9-story shopping mall. Can you find the panda? Here’s a closer look: 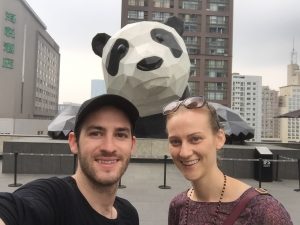 This is now the must have photo in Chengdu. If your Wechat feed (China’s Facebook/whatsapp) doesn’t have a picture of this panda, you can’t prove you’ve been to Chengdu. 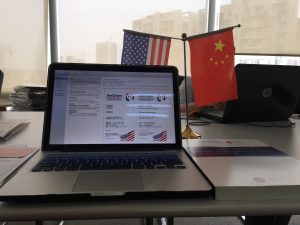 This is a photo taken of my current workspace. Having spent nearly 4 years in Chengdu, I’ve gone through some major upgrades. I once ate instant noodles multiple times a week while trying to refrain from asking my family for spending money. Now I work as the Marketing Manager for the American Chamber of Commerce in Southwest China. My job includes analyzing policies from the central and local government, translating, editing, and contributing to the White Papers on behalf of the Southwest Region (an annual publication that elaborates on business conditions in China. It’s ultimately read by economic policy makers in Beijing and the White House). 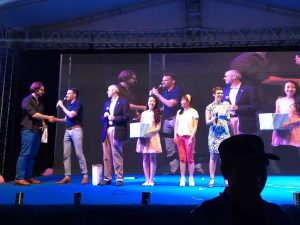 Here I am on stage for our 2016 Independence Day Charity celebration. I’m standing next to the General Consul Greene of American consulate of Southwest China. Attendees included officials from the U.S, Israel, South Korea, New Zealand, and Sichuan provincial government as well as AmCham members and executives—from Fortune 500 multinationals to local entrepreneurs. There were kung fu performances, rock singers, dancing, Sichuan face-changing, clown performances, and more. 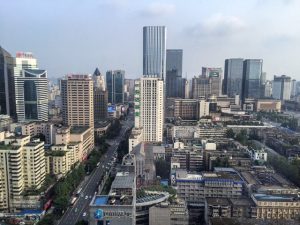 The metropolitan area feels more cosmopolitan than ever. The Chinese youth is ambitious and culturally active. You can find anything from underground boxing matches to special deals for English-style tea time at the Ritz Carlton. 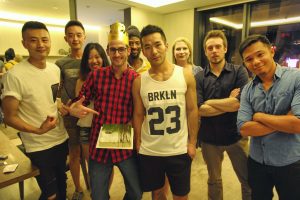 This year for my birthday I treated myself to a night in Chengdu’s best hotel Temple House. I highly recommend it if you or anyone you know is visiting Chengdu for a few days. 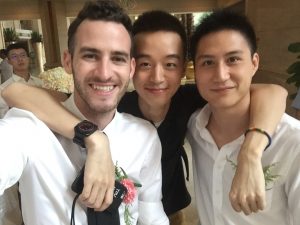 I was best man in my friend’s wedding. 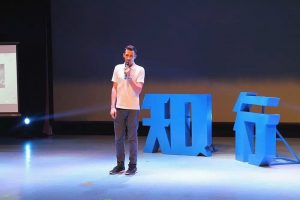 Here I am giving a presentation about independence and freedom at what can be referred to as a Chinese TED talk. I presented for 15 minutes—all in Chinese. I’ve found that the freedom to express ideas and opinions undermines the common assumption that this is a heavily censored and controlled country. People are eager to know as much about the outside world as possible. 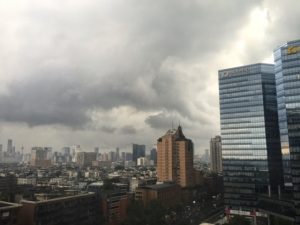 In the summer months, Chengdu has many thunderstorms. It can be very hot. I know many students are curious about the weather, so that’s why I mentioned it. And what about the pollution? 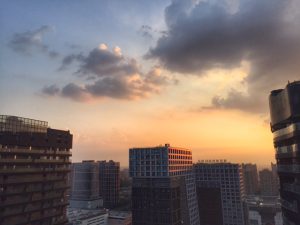 All I can say is this: Chengdu’s air seems to be getting increasingly better. 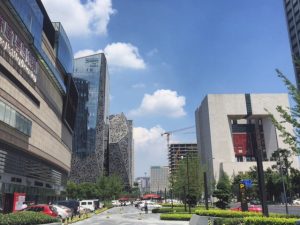 A big conversation topic this year is how clean the air has been and how blue the skies are. 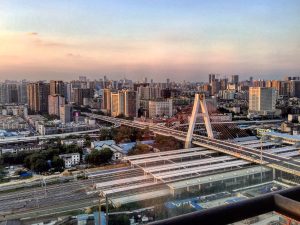 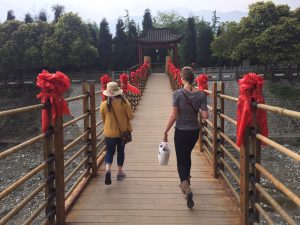 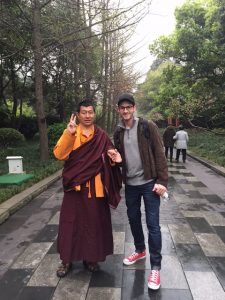 Here I am with a Tibetan monk in People’s Park. 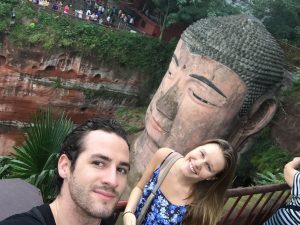 I want to say that—while not as international or developed as BeiShangGuang (the colloquial way to refer to the developed Eastern cities: Beijing, Shanghai, Guangzhou)—Chengdu is no longer the place where you can’t get peanut butter, cereal, or tampons. I’ve had some students ask me about the availability of these things, and I have told them not to worry. When advising students, I think you should let them know that the city is quite globalized now. Chengdu is asserting itself as the most comfortable place to live in China, and they’re trying to attract more foreign talent. But undoubtedly, it still holds its place as the better choice if you’re looking to get a local Chinese experience. And of course, it’s especially well-suited for nature lovers.

Since last year, the Leshan Giant Buddha is accessible by high speed rail in 1 hour from the South railway station. The many UNESCO world heritage sites are more accessible than ever. 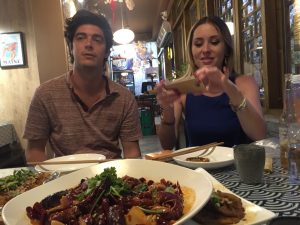 And of course the best thing about Chengdu is still the food! These Sichuan spicy crayfish are to die for. 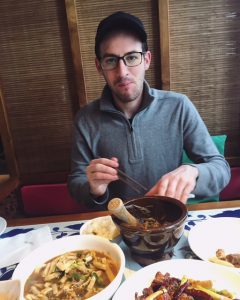 Even to this day, I am still trying foods that I’ve never had before. I will never get enough! 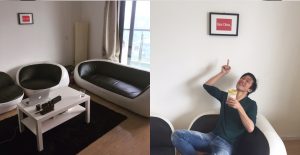 This is my apartment. It’s worth mentioning that the cost of living in Chengdu is very affordable. The rent for my one bedroom apartment with a balcony on the 27th floor and metro station below is only 500 USD a month. This is considered pricy for Chengdu. 500 USD a month in Shanghai gets you a room in a shared three bedroom apartment. Probably a trek up to the 6th floor since there won’t be an elevator. The building will be old and the kitchen and bathroom will be small. My shanghai friends gasp in envy when they find out what I pay for such a nice apartment. If students are looking to live comfortably in China after their studies, you should mention the cost of living in Chengdu. It’s going to be harder to find jobs outside of education in Chengdu, but overall they will get more bang for their buck with what they earn.

Okay, that’s about all I have for now. I have a lot to share about my experiences in China, and then some, as you can tell. But I hope that this was informative and insightful! If you have any questions or comments, feel free to respond to my email! 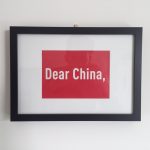