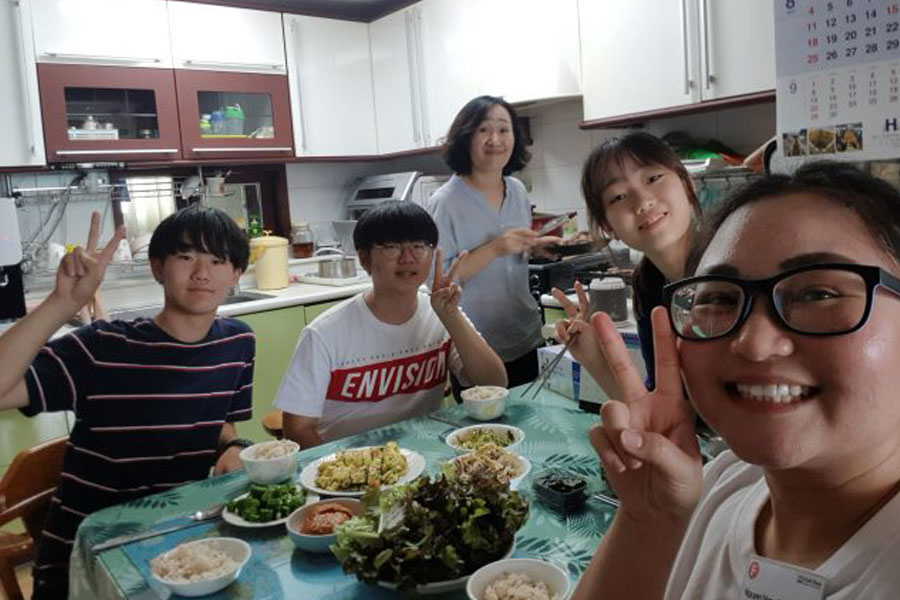 Finally, I have arrived at Gwangju, South Korea. I have been very excited about learning Korean lifestyle and culture. Luckily, I have a wonderful team, especially enthusiastic Korean buddies, who are willing to explore the local areas and help me have many interesting experiences. It is very awesome because each person in our team comes from different places such as Korea, USA, Greece, Poland, Malaysia, and Canada, but we have been close since the first day.

Me and my team

On the first day of the program, I was told that daily interactions are the best way for a foreigner to learn about the lifestyle and the culture of the local area. Therefore, I have been trying to learn Korean culture by observing and practicing it through daily interaction.

One of the most impressive experiences that I had during the first week in Gwangju is the differences in the cultures of the U.S., Korea, and Vietnam. As a person who was born in Vietnam and has been living in the U.S., I feel very interested in discovering cultural differences. There are three aspects of Korean culture that I think are the most significant; giving and receiving items with two hands, respecting others’ personal space, and the importance of formal language in every conversation.

The first thing I realized since the orientation day is that Koreans always use both hands when giving or receiving items from others, especially from older people. This is a very important gesture in Korean culture, which shows respect to another person. For instance, when I go to the convenient store to buy food, I always give the money to the cashier by both hands and slightly bowed down to show my respect. I think this is a very beautiful gesture because it shows the appreciation and politeness towards each other in every interaction.

With Vietnamese people, we are also taught that we should use both hands when giving or receiving items from older people. However, Korean culture values this gesture more than Vietnamese culture does. This is not a familiar gesture to Americans. So, I believe this is very significant for Americans to know about when working with Koreans, either in business or normal life.

Another cultural aspect that I learned is that Koreans have a very strict principle for personal space. Korean people really respect others’ personal space. For example, they do not hug each other when they meet their friends. One of my Korean buddies explained that it would be disrespectful if you hug other people in public.

Since Vietnamese and American people are very comfortable with hugging when meeting friends, I felt it is very interesting and important to know about this. With this experience, I can avoid undesirable misunderstanding in the future if I have opportunities to interact with more Korean people.

We respect each other’s personal space even when taking pictures

Lastly, I have learned about the importance of formal language in conversation. Koreans always include the word “yo” and “da” at the end of the sentence, which makes it become more formal. For example, Koreans will say “gomo woyo” for “thank you” in a formal way, and with their close friend, they can say “gomo” instead.

Different from Vietnamese and American culture, Korean people have to use the “formal word” for every sentence, unless they are told that they can talk in an informal way. This experience clearly showed me the high standard of politeness in conversations with Koreans.

After one week in Korea, I realize that Korean culture is very different from Vietnam, even though we are both Asian countries. On the other hand, compared to American culture, Korea culture is stricter and more formal. These cultural experiences in Korea have helped me be more aware of the differences in every interaction and conversation.

Also, they help me to be more professional and adaptable when working with Koreans, specifically, and other cultures in general. I still have three more weeks in Korea, and I will try my best to earn more helpful and interesting knowledge, not only from Koreans but also from my friends from all over the world.

I hope that I will have more valuable experience with my Korean buddies and my friends from different places. I will update other wonderful stories in the future in order to help everyone understand more about the life of a Vietnamese-American student in South Korea.

Trang Nguyen is a USAC Gwangju alumna. She was the recipient of the Fund for Education Abroad Scholarship and you can read more about her time abroad on the FEA Blog. 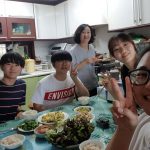